To share your memory on the wall of Lewis Dandurand, sign in using one of the following options:

Preceded in death by his beloved wife Ileen. Survived by son, Donovan (Kim); daughters Rebecca, Kay Koll (Greg), Michelle Enos (Larry Johns), Sharon Leonn; six grandchildren and two great-grandchildren.
Lewis attended grade and high school in Aurora, Kansas graduating H.S. in June 1946. Lewis served in the U.S. Army Air Corp 1946-49, stationed in the territory of Alaska. After an Honorable Discharge, Lewis made his way back to Concordia, Kansas where he married Ileen Fraser on February 20, 1954. All five children were born in Kansas between December 1954 and October 1962. The family moved to Portland, Oregon in 1964 and again to Tucson in 1971.

During his career Lewis held a variety of positions: sealing fuel tanks inside new B-52 wings for Boeing; as a welder on heavy earth moving equipment, and finally providing facility maintenance at the Arizona Air National Guard in Tucson, where he retired in 1990.

Lewis and Ileen enjoyed several years in retirement together as active members of the local Studebakers Drivers Club, attending out of state functions and indulging his passion of restoring Studebaker cars. Lewis continued his activity with the club after Ileen passed away in 2001, with support from his friends in the club. Throughout this time Lewis also served as usher at Most Holy Trinity Parish.

To send flowers to the family or plant a tree in memory of Lewis Leland Dandurand, please visit our Heartfelt Sympathies Store.

Provide comfort for the family with a meaningful gesture of sympathy.

We encourage you to share your most beloved memories of Lewis here, so that the family and other loved ones can always see it. You can upload cherished photographs, or share your favorite stories, and can even comment on those shared by others.

Posted Jun 14, 2019 at 02:01pm
I always enjoyed spending time with Lewis. He was a kind man of God and never forgot his roots. He had a wonderful smile which he shared frequently. Lewis and Ileen raised five good-hearted, hard working children. I love them all. Lewis loved his Studebakers and I enjoyed a tour of his workshop/garage he took me through. RIP, Lewis, reunited with sweet Ileen.
Comment Share
Share via: 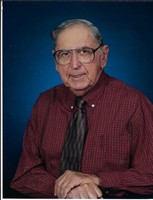