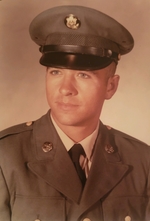 TUCSON—Michael passed away peacefully early Saturday November 9, 2019 after a brief battle with
cancer, at the VA Hospital in Tucson, Arizona. He is survived by his daughter Ashlee Arnett, sons
Michael K. Davies and Jeff Ryan. He will also leave behind two grandsons, Kristian Davies and Luis
Garcia, many nieces and nephews, and two older sisters. He is preceded in death by his father Captain
Anthony Davies, mother Mary Davies and two younger sisters, Marie and Toni Lynn

He was a second generation Tucsonan and lived in Arizona for 68 years. His family eventually moved
to Sierra Vista, Arizona where he graduated from Buena High School, but he returned home to Tucson
after Vietnam. He was a jack of all trades and took pride in being a business owner. He brought life and
laughter into everyone's life and never met a stranger. Dad lived a very full and fun life. He will be
sorely missed by many, but most of all, by his children. TTFN!

All rights reserved. This obituary is also archived at obittree.com