Provide comfort for the family of Cookie Avvampato with a meaningful gesture of sympathy.

Cookie was born on June 23, 1948, in Seattle, WA, to John and Verda (Meyers) Moore. She married the love of her life, John Avvampato, in 1967, and they raised two children, Thadeus and Aine. In 1982, Cookie graduated from The College of the Desert with her Registered Nursing Degree. She completed her BSN through the University of the State of New York in 1994, and her MSN from the University of Phoenix in 2000, at the age of 52. Cookie was commissioned into the United States Air Force Reserves (Nurse Corps) as a First Lieutenant in 1990.

Cookie’s passion in life was helping others, especially veterans and soldiers. 23 years of her nursing career were devoted to the VA Healthcare System, first in Loma Linda, CA, lastly in Tucson, AZ, where she retired in 2008. In 1991, Cookie was called to serve in Operation Desert Storm. In 2004, she volunteered for deployment to the Middle East, in Operation Iraqi Freedom, to care for soldiers wounded in the War on Terror. Over the course of her Air Force career, Cookie volunteered numerous times for deployment; serving and training our troops in various locations around the globe, from Korea to Germany and in the United States. While deployed, she gave her free time to help wounded soldiers through the Wounded Warrior Program. Cookie won numerous awards over the course of her career in the USAF, including Field Grade Officer of the Year, the Air Force Commendation and Air Force Achievement Medals, and the Meritorious Service Medal, and she is listed in the Library of Congress as a Woman of Four Wars. Through the Library of Congress, you can view her video interviews and read more about her distinguished military career. After retiring from the VA in 2008, Cookie continued in the USAF Reserves until 2014, when she retired with the rank of Lieutenant Colonel at the age of 66.

Cookie loved Starbucks coffee, and most afternoons you would find her sipping her favorite decaf Americano or a Passion Tea. The outdoors was also a great love of Cookie’s, and most of her free time was spent hiking and camping all over the country, with her favorite place in the world being the Grand Canyon, where she hiked rim to rim to rim too many times to count.

Preceded in death by her father, John, and mother, Verda, Cookie is survived by her husband, John, her two children, Thadeus and Aine, and her six grandchildren, Cameron, John, Stuart, Sara, Emma and Amy. Cookie is also survived by her two siblings, Bobby and Tamara, and many dear friends whom she counted as family.

Cookie chose to be remembered in a celebration of life at the Grand Canyon in the Spring of 2020. Details can be obtained through her daughter Aine , via Messenger, email, or phone. Donations in her memory can be sent to the Wounded Warrior Project, via their website or through the USPS.
Read Less

Donations are being accepted for: WOUNDED WARRIOR PROJECT INC.

We encourage you to share your most beloved memories of Cookie here, so that the family and other loved ones can always see it. You can upload cherished photographs, or share your favorite stories, and can even comment on those shared by others.

Posted Nov 14, 2019 at 01:49am
Aine, I'm here for you ! I know your Mom was your bestfriend and role model,and,your heat is probably broke but it will heal with time remember " This too shall pass" Maggie
Comment Share
Share via:
ML 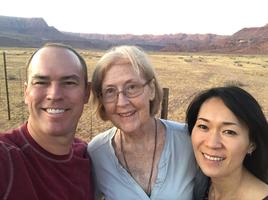 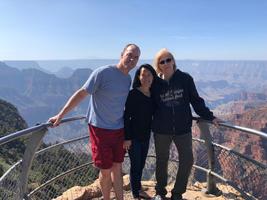 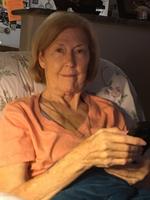