To share your memory on the wall of William Taylor, sign in using one of the following options:

Born 11-22-1924 in Centerville, Iowa, Bill was raised on a farm where life was rough with no electricity or running water, he Joined the Army Air corps at the age of 17, helping end World War II.
Inducted into the Army Air corps, 5/20/1943-1946, he was trained in electronics and communications. Basic training was in Wichita Falls, Tx. From there he was assigned to Scott Field in Illinois just east of St Louis where the mission of Scott Field was to train “the best damned radio operators in the world”. From Scott he was assigned to a group of 4000 other military personnel and Red Skelton boarding a ship bound for Naples, Italy where he toured Pompeii and hiked Mt Vesuvius. Next he was taken to Athens where he toured the Acropolis then Cairo. He was eventually assigned to a secret refueling base in Abadan, Iran where he was responsible for communications between ground control and the US Air Force part of the Army Air Corps. After discharge he continued his same role there under the auspices of TWA for several more months.

Upon returning to the US, William utilized his GI Bill for further education attaining his degree in electrical engineering at Washington University in St Louis, Mo. He then was employed by Southwestern Bell in the St. Louis area installing phones and managing communication systems and computers for private individuals as well as businesses. Later, employed by IBM for 36+yrs in St. Louis, Poughkeepsie and Boulder, Co, he was at the forefront of the development of computers, communications, and guidance systems. His team was jointly awarded a US patent for the development of the floppy disc drive and he worked with the team on the guidance system for the Mercury Space project as well as the early Columbia project. William took an early retirement in 1988 to be the sole caregiver for his terminally ill wife until her death in 2013.

Further grieved by his stepchildren Charles Davidson of St. Peters, Missouri and Frances (Joy) Davidson of Columbia, South Carolina their spouses and 4 more grandchildren as well as a large extended family through Ellen.

A joyous and fun-loving person, William was kind with an open hand as well as an open heart. Humble, with a charismatic personality and infectious humor he was loved by all that he met. William had a great many interests including road trips, music, camping, fishing, wine tasting and a craft beer club.

Fearless, he also participated in zip lining, motorcycle riding, indoor skydiving in preparation to do a tandem jump this year He, also, participated in hot air ballooning where he was able to see first hand the modern development of the guidance systems he had worked to develop in use in the private sector.

Being an avid square dancer, round dancer, contra and line dancer, he enjoyed traveling throughout the US and internationally to participate. William had the distinction of joining the honored ranks of those still dancing at the age of 95.

William was a member of the American Motorcycle Association, the Goldwing Motorcycle Club and was also, a member of the Retreads. All international associations of motorcycle riders. During his membership with these clubs Bill traveled across the US participating in rallies often taking the award for oldest member still riding, latest being age 95. This year he was to ride with the American Legion lead the motorcade of flags opening the 80th year of Sturgis.

At this time there will not be a traditional funeral. It has been determined that because of his service to our country, William is eligible for interment at Arlington National Cemetery in Washington DC. with full military honors as a WWII hero. An announcement of when it is to happen will be made and anyone interested in joining us in bestowing this final honor are welcome to attend.

As the Covid situation continues to develop we cannot have a traditional gathering of friends at a hall. We will celebrate a funeral mass on July 11th at 11:00AM at Santa Cruz Catholic church 1220 South 6th Ave. Tucson, Arizona, 85713. With an open house to follow at Bill and Ellen’s home (or a hall if restrictions are lifted) Rincon Country West mobile home park.

Greatly missed, May he rest in peace with all of our love and prayers.
Please continue to be safe. Observe social distancing, hand hygiene and facial coverings.
In lieu of flowers, we are asking for donations for the Honor Flight of Southern Arizona
Full, official obituary posted on Abbeyfu.com and obittree.com
Read Less

To send flowers to the family or plant a tree in memory of William King Taylor Jr., please visit our Heartfelt Sympathies Store.

There are no events scheduled. You can still show your support by sending flowers directly to the family, or planting a memorial tree in memory of William King Taylor Jr..
Visit the Heartfelt Sympathies Store

We encourage you to share your most beloved memories of William here, so that the family and other loved ones can always see it. You can upload cherished photographs, or share your favorite stories, and can even comment on those shared by others.

Posted Jun 22, 2020 at 11:43am
We had the honor of Bill's friendship for several years as his neighbor across the street at Rincon. He was truly one of the most kind, gentle and genuine people you could hope to know. He was never to busy to visit at a moments notice and always inspired us with his knowledge of so many things. He shared many stories with us about his life adventures and his interesting point of view was always on the positive side. We will remember him and truly miss him. Life on Q street just will not be as joyful without our "Mayor" and friend. Rest in Peace Bill, you earned it!
Johnny and Carol Buse
Comment Share
Share via:
ED

thanks so much for those comment! I had forgotten about the Mayoral key on the porch, lol. not sure what to do with it. will have to consult with Jan on who would be next in line to become Mayor of Q st. 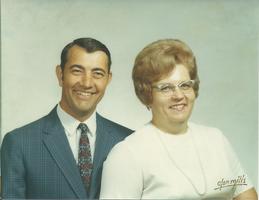